‘It is refreshing to encounter music that does not easily fit into one of today's fashionable genres’ (Plan B)
‘Red Painted Red continuously please fans of arcane melodies through many tones and emotions, not one musician sounds quite like them.’ (Regen) 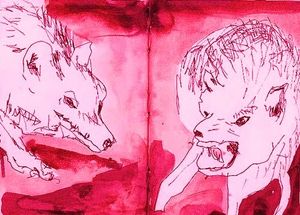 0:00/???
"In the forests of Englandshire, something stirs and with the rustling leaves and chorus of words whispered upon the wind announcing the return of ethereal duo Red Painted Red. Although they are actually based in Manchester, their music is not the music of the urban combat zone but more of parallel organic deconstruction.
This is art, of course, but a curiously soothing art being superficially like a series of musical pictures painted in pastel. The undercurrent, though, is a lot greyer than that pretty landscape would ever be with inner torment high on the lyrical agenda. Yew's dramatic vocal interpretations dose those dark words with emotion adding a notable edge to the disturbing sentiments expressed in "I Can't See" and "Days To Die From Paracetamol" and, balanced against her siren like charms, are some truly bleak and, at times, almost industrial ambient soundscapes. An acquired taste they may be but Red Painted Red are the archetypal square peg that refuses resolutely to fit in the round hole of mediocrity.
The elaborate packaging of the CD is also worthy of note for those who still like it physical."
"Not so much an album, more a piece of art that just happens to exist as a collection of songs. Those songs arrive as part of a charming artefact that looks like it was assembled on Red Painted Red’s kitchen table. The textured-parchment style CD envelope unfolds to reveal some hand-painted miniature postcard prints, and a lyric sheet on which everything is hand-written and illustrated with meticulous, spindly flower drawings, like a 19th century botany book.
The music itself is introspective yet counter-intuitively warm. It’s always rhythmic - sometimes heavily, compulsively so - and never less assertive, even when it all gets twilit, like the countryside at dusk. Vocalist Yew sounds like she’s sitting next to you. Sometimes her voice is commanding, up-front element of the sound, at other times a skittering whisper amid roiling electronics. ‘Safe In Sleep’ wraps its tendrils around you like ivy, but ‘God Song’ is downright scary. Sepulchral rumblings give way to an urgent, nervous beat. ‘I see him coming now,’ rasps Yew’s vocal, and it sounds like looking doom.
It’s frustrating that Kate Bush’s latest collection of vaguely hippyish AOR has been treated with such reverence when the real deal is being created on a kitchen table somewhere in Manchester. Long live kitchen tables, is what I say."

"During 2011 many compliments have been delivered to Esben And The Witch for their intense Witchcraft-inspired songs. Those same plaudits could easily be applied to Manchester duo Red Painted Red who offer a similarly riveting selection of arcane songwriting. Their new album features the usual lovingly hand-crafted packaging but surprising signs of lightening up too.There is undoubtedly a sinister undercurrent and surface to Red Painted Red’s material.
One only has to glance over titles such as ‘Days To Die From Paracetamol’ to know this. However, there is also more ambition on show this time. So look beyond the oppressive, thunderous noise of ‘Misunderstood’ and turn instead to ‘Safe In Sleep’. It’s actually a tender-sounding ballad even if it’s most likely to be about dying. ‘God Song (Fools And Fire)’ and ‘I Can’t See’ also reveal a hitherto hidden commercial flair.  Still, it’s a relief to note they haven’t shed their black cloaks completely, as ‘Wondering How They Fly’ brings events to a full-blooded, shuddering halt. So overall, this an interesting development in the career of Red Painted Red. There is a risk of losing a cult following but balanced against the potential of appealing to a wider audience of gothic folk, it’s a risk worth taking."